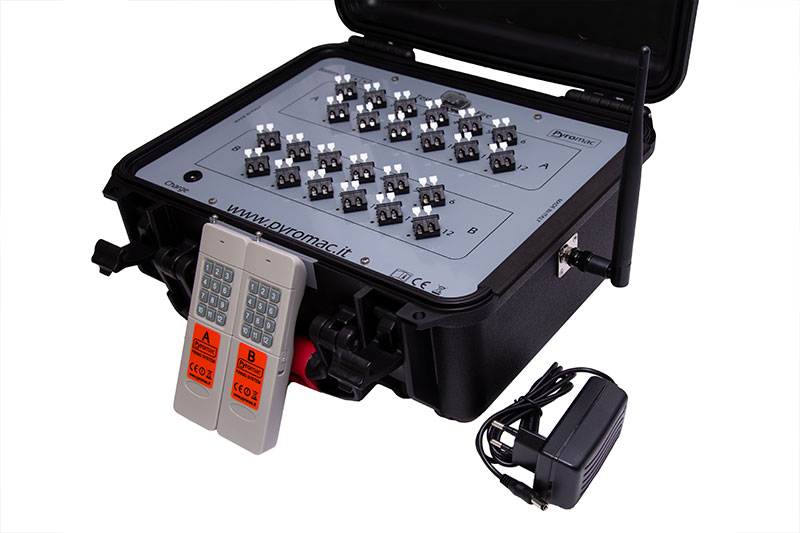 This system has the same functions as the 12ch Remote controlled, but it’s in a military case and has 24channels.
It manages n 24 lines of independent firing, on each of which it is possible to connect more igniters simultaneously (the number of igniters depends on their technical characteristics, the distance in which they are placed with respect to the control unit and the type of connection used: it is about 20 ignitors in series).
The two transmitters for remote management are marked with the letter “A” (remote control that manages the channels 1 to 12) and the letter “B” (remote control which operates channels 13 to 24). Is turned on by means of a slide switch on the side. This allows you to be able to uses safely even with the remote control unit already armed.

The ignition control unit, has a three positions rocker switch: when is in the center position the unit is off, when it is placed on the left, the control unit lights up in “Test” mode, and a LED shows the effective inclusion of the mode; when is positioned to the right the unit turns on in “Fire” mode and is then ready to execute orders given by the remote control. A flashing red LED shows the effective insertion mode “Fire” (army unit).
The above-mentioned “Test” mode includes the lighting of a LED for each channel of the controller. This is achieved by circulating a reduced current in all lighters connected (called no-fire current). If the controller finds that lighters are correctly wired and still intact, then turn on the LED for that channel. Otherwise remain off. The Pyro can therefore instantly verify the correct connection of all lighters.
The powerful internal batteries also allow the control unit to perform many shows without being recharged. The autonomy of the unit in “armed and ready to shoot” can be several days. They are installed in the upper right corner 3 simple LEDs, which have the function of indicating when the battery is running low. Just make sure that the LED is not lit “low battery”. A second LED alerts you when the battery is about to run out.

The remote controls used for remote ignition have a range of about 200 meters in an open field and are switched on by means of a slide switch placed on the side of the transmitter, allowing them to be secured in the moments before the shot.
The radio communication takes place through a random coding, in order to avoid unwanted activations by other devices using similar frequencies.
There is also the possibility of setting the same transmission coding on multiple control units, so as to be able to manage multiple units with a single remote control. For example, think of shows with three identical launch stations (perhaps at several tens of meters away from each other): in this case, by setting the three control units with the same coding, it will be possible to control the three stations simultaneously in the same way, thus avoiding to lay hundreds of meters of wire and thus saving several hours of work.
Pyromac, unlike other manufacturers, offers the possibility to customize this coding directly to the Pyrotechnician, by means of a simple and quick save operation of the code generated by the transmitter. This allows you to configure multiple control units as desired in any eventuality.
The Test function requires that a blue confirmation LED lights up in the terminals to which an igniter ready for use is correctly connected. In empty channels, with igniters already used, broken or badly wired, the LED will remain off.

The type of terminal used (QuickClips), is produced and sold almost exclusively for the use of fireworks. Its structure in steel and plastic, allows the insertion and the perfect tightening of one or more wires. You simply press two fingers on the outside of the plastic making it then scroll down, insert the wire or wires already stripped within the space that is created between the outer plastic and steel center, and then release the outside. A powerful spring will tighten the conductor ensuring perfect electrical contact. There is no hole where threading of the wire into the central cylinder: the conductor is simply placed vertically between the outer plastic and the metal center at any point.
The entire unit is housed inside a briefcase military HPRC2300 of Italian manufacture, (http://www.plaber.com/2300.htm) whose mechanical performance, guarantee a perfect protection device to weathering and any shocks. The use of stainless steel for panel, clamps and screws, it does not allow moisture, over the years, ruin and wear out the components