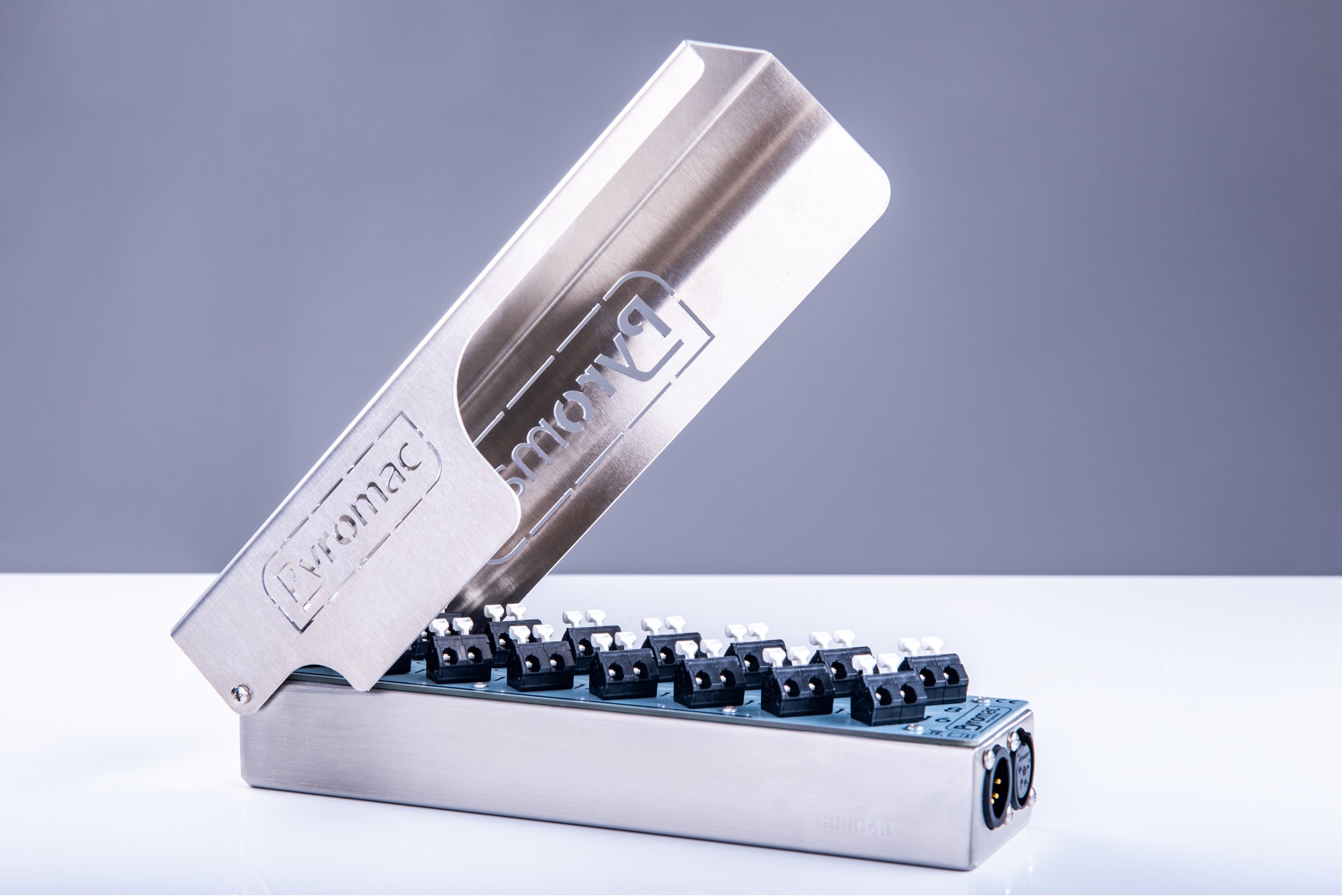 The SLIM16 slave is one Pyromac’s latest additions. It’s a very small module with 16 channels that can be used as a Slave for the Master Manual 192 or for pyro-musical systems controlled by the Master Compact.

A small and light-weight (only 6x 6,5×24 cm and 600g) system specifically designed to be mounted directly on arches and structure for single shots. Because Slim16 does not have internal batteries, it is guaranteed that in any case the firing cues cannot be set off during transportation. Another advantage (as well as not having to worry about charging the batteries) is that this system does not need any kind of maintenance!

The reduced consumption of electronics and the presence of powerful capacitors allow to connect the firing system to the power source even form 200 meters away. Up to 10 SLIM16 can be connected on every cable section. Being a small firing system does not mean low-performing, in fact up to 20 firing cues can be connected in series to each channel and the minimum time frame between one shot and the other is 0,01 seconds, which is less than what the human eye can perceive.

The internal electronic board is built using the most cutting-edge technologies available on today’s market in order to guarantee the best possible performance, even in the worst conditions. The ignition of the outputs is activated with specific components in solid form: by avoiding mechanical contact, issues of damage over time and malfunctions due to shocks and vibrations disappear. With the goal to further increase safety, before being able to activate any output, various parts inside the system must receive the firing command at the same time.
Sometimes the incorrect connection of igniters’ cables or fallen burning material can cause short-circuits on the wires. When this occurs, many firing systems crash, are severely damaged or just shut down. Instead, the specific technology used in Pyromac’s systems automatically limits the current output, avoiding any kind of damage to the firing system or the cables. Obviously the short-circuited firing cue cannot be used, but the rest of the show will go on without any further incidents.

An essential feature is definitely the firing cue test: this system electronically runs a test by sending a controlled and safe amount of electricity in order to avoid all possible involuntary ignitions. The test results are digitally transferred to the remote control device so that its condition can be monitored from the Master at any given moment.
The protocol used is maximum safety and, as well as having encrypted internal codes, it allows the customer to insert his own secret code (user code). This way it is possible to work in complete safety even in case of competitions where also other contestants are using the same Pyromac system.

Latest feature of the SLIM16 is the new kind of quick-clamp terminal used to connect the firing cues. In fact, model and brand have been changed and now our supplier is the german Weidmuller, who is leader in interconnections. A strong steel spring locks the wire in its place, stopping it from falling out of place even when tugging on it. The hold and the electrical contacts are excellent quality, in fact by pulling the cable on the firing cue, you can even lift the entire system without pulling out the cable. Because the two inputs are very close together, connecting and disconnecting can be done twice as quick. The two cables of the firing cues can be inserted at the same time and with just one push. Unlike other companies, the series of connectors that we provide, allow a 120° opening that helps the operator see where the cable needs to be plugged in. Last but not least, is sturdiness: these small connectors are also very resistant to the operator’s strength when opening the springs.
Slim16 has an aluminum cover with a removable hinge that allows to protect the modules even from fallen burning material. The operator can also decide to remove the cover in order to set the Slave directly on the racks with tear-off cable ties. The small size allows it to be placed anywhere! Furthermore, Pyromac has made Slim16 rain resistain.