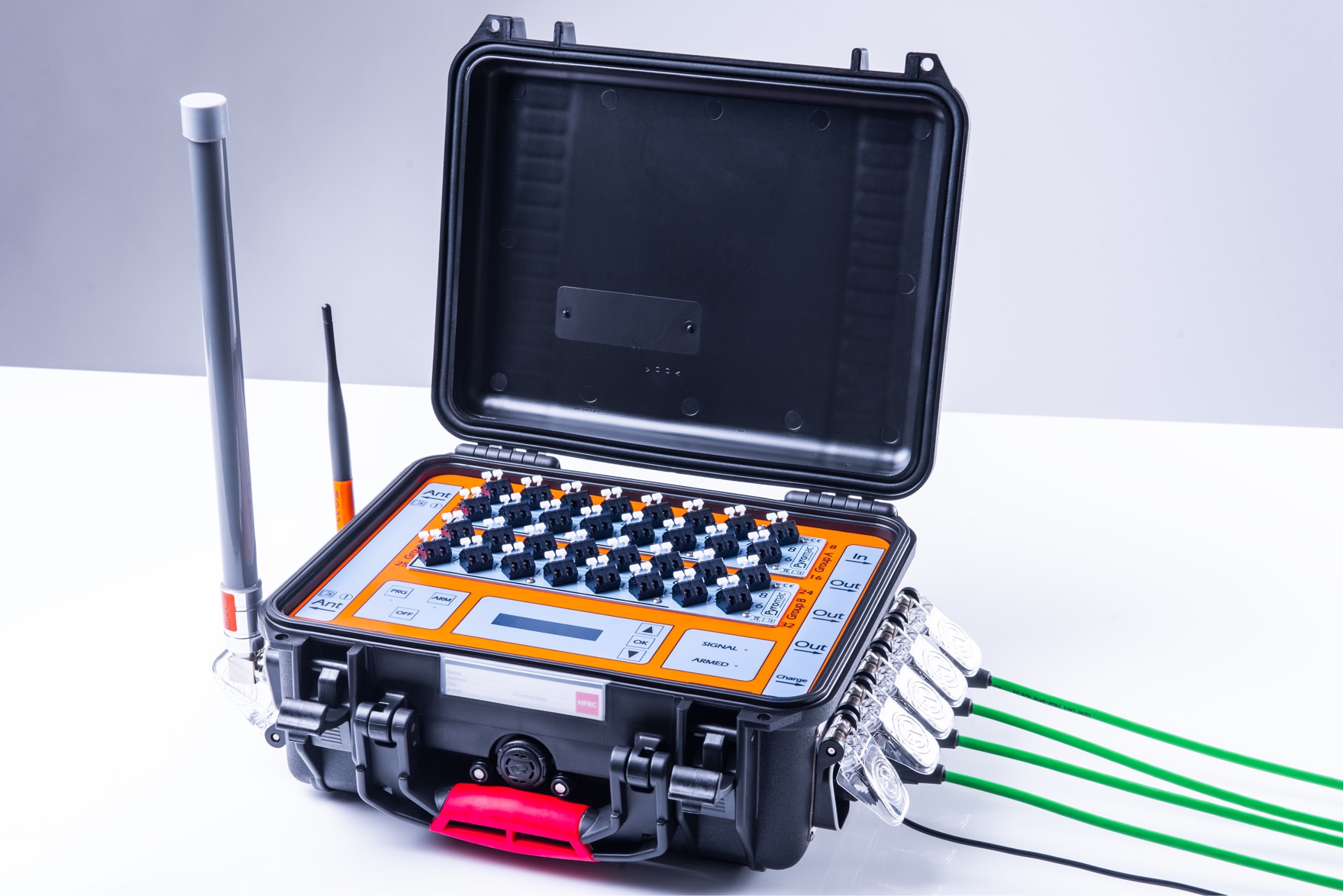 The Pyromac7 is a very versatile module: thanks to its multiple functions it can adapt to create the most diverse displays that the operator can think of.
This system can be used in two ways:
1. SLAVE MODE: remote controlled by the Master
2. SELF MODE: used autonomously to create pyrotechnical sequences with trigger commands.
In SLAVE MODE one or more Pyromac7 are connected to each other and to the Compact Master. The Master device is able to monitor all modules connected, to verify the condition of firing cues at any given moment, to manually order to fire when wanted or to execute pyro-musical shows. The connection can be done by XLR4 cable or by Radio Modem.

In SELF MODE, so without also using the Master, all the functions listed below are possible:
– “Step-by-step” manual: every time that a trigger signal is sent to the system, a channel will be turned on.
– Constant speed sequence: the device functions as a traditional sequencer, so after entering and confirming the firing speed (from a hundredth of a second to 100 minutes), the system will execute a sequence of all 32 channels at a constant speed. The sequence can be previously simulated in order to check if the timing entered corresponds with the timing desired.
– Accelerated: it’s the system’s pre-programmed setting that allows to give the ignition of the firing cues a certain acceleration. The user sets how much the entire effect needs to last (from 7 seconds to 100 minutes) and the system computes the necessary acceleration curve to reproduce the sequence.
– Decelerated: inverse effect of accelerated setting.
– Personalized program: this feature allows anyone to create a personalized sequence, indicating every time interval between one ignition and the next.
A computer isn’t necessary: this can be done directly through the display and the 3 programming buttons at the edge of the control panel. After entering all time settings, the program is saved on the system and can be recalled when needed. The selected sequence can be simulated at any time in order to verify that the timing entered corresponds to expectations. Up to 4 displays can be saved at the same time.
Start or Trigger pulse refer to an electric pulse sent to the “Trigger In” terminals with a voltage range between 8 and 100Volt DC. This pulse can be generated by a generic 12V battery, by the specific Pyromac Starter or by any other firing system with suitable characteristics. When using the system in SELF MODE, this command is necessary in order to start the set of single shot sequences.

The multilingual menu allows anyone a simple and safe use of the system.

The powerful internal battery allows the system to execute many displays without the need to be charged, in fact the battery life is worth about 20 hours (in stand-by mode). So there aren’t any issues if the operator wants to turn on and set the system hours before the show (for example for aqutic shows). The battery charger is provided with the firing system.

The Pyromac7 includes an internal digital voltmeter to always keep the battery’s electric tension under control. The battery percentage is shown on the display, but it can also be monitored from distance with the Master Compact.

It has 3 XLR4 outputs to connect up to 30 SLIM16 modules, 10 for each output. These connectors are equipped with a very sturdy and hermetic protective cover made by Neutrik, which with its powerful closing spring guarantees high performance. The same reinforcement is also present for the two connectors for the antennas positioned on the left side of the case.

Pyromac uses a simultaneous dual-frequency connection. First company worldwide to use this technology, we are able to guarantee wireless communication even in case of interference. This is because by working on two different radio frequency bands, it is highly unlikely for there to be an interference on both frequencies at the same exact time.

The internal electronics boards are developed with the most modern technologies on the market, in order to ensure the best performance even in the most unfavorable conditions.

The control unit has digital switches, no mechanical switch is present on the control unit. This allows for better energy management and the ability to clean the control panel even with a damp sponge without the risk of damage or oxidation. It is also possible to switch off the module remotely, with a special command sent by Master Compact.

The charger connector is positioned outside the case (also protected by the Neutrik cover) to allow the device to be recharged even if closed and stacked in the warehouse. At the same time it optimally protects against the ingress of any dirt, humidity or, worse, ignition wires, a phenomenon that could cause unwanted ignition.

Brand new feature of the Pyromac7 2019 version is the new kind of quick-clamp terminal used to connect the firing cues. In fact, model and brand have been changed and now our supplier is the german Weidmuller, who is leader in interconnections. A strong steel spring locks the wire in its place, stopping it from falling out of place even if tugging on it. The hold and the electrical contacts are excellent, in fact by pulling the cable on the firing cue, you can even lift the entire system without pulling out the cable! Because the two inputs are very close together, connecting and disconnecting can be done twice as quick. The two cables of the firing cues can be inserted at the same time and with just one push. Unlike other companies, the series of connectors that we provide, allow a 120° opening that helps the operator see where the cable needs to be plugged in. Last but not least, is sturdiness: these small connectors are also very resistant to the operator’s strength when opening the springs.
The entire system is placed inside a military case, that is produced in Italy and made with specific high performance resins. Its mechanical characteristics guarantee that the device is perfectly protected from weather conditions and possible collisions. Even after years of being exposed to sun and rain, the materials used maintain their original sturdiness. The foam “without memory” placed on the right side of the system, allows to let out the igniters cables and close the cap with hooks. This guarantees the device to remain completely protected even if left in bad weather conditions for a long period of time (including if turned on and working!).