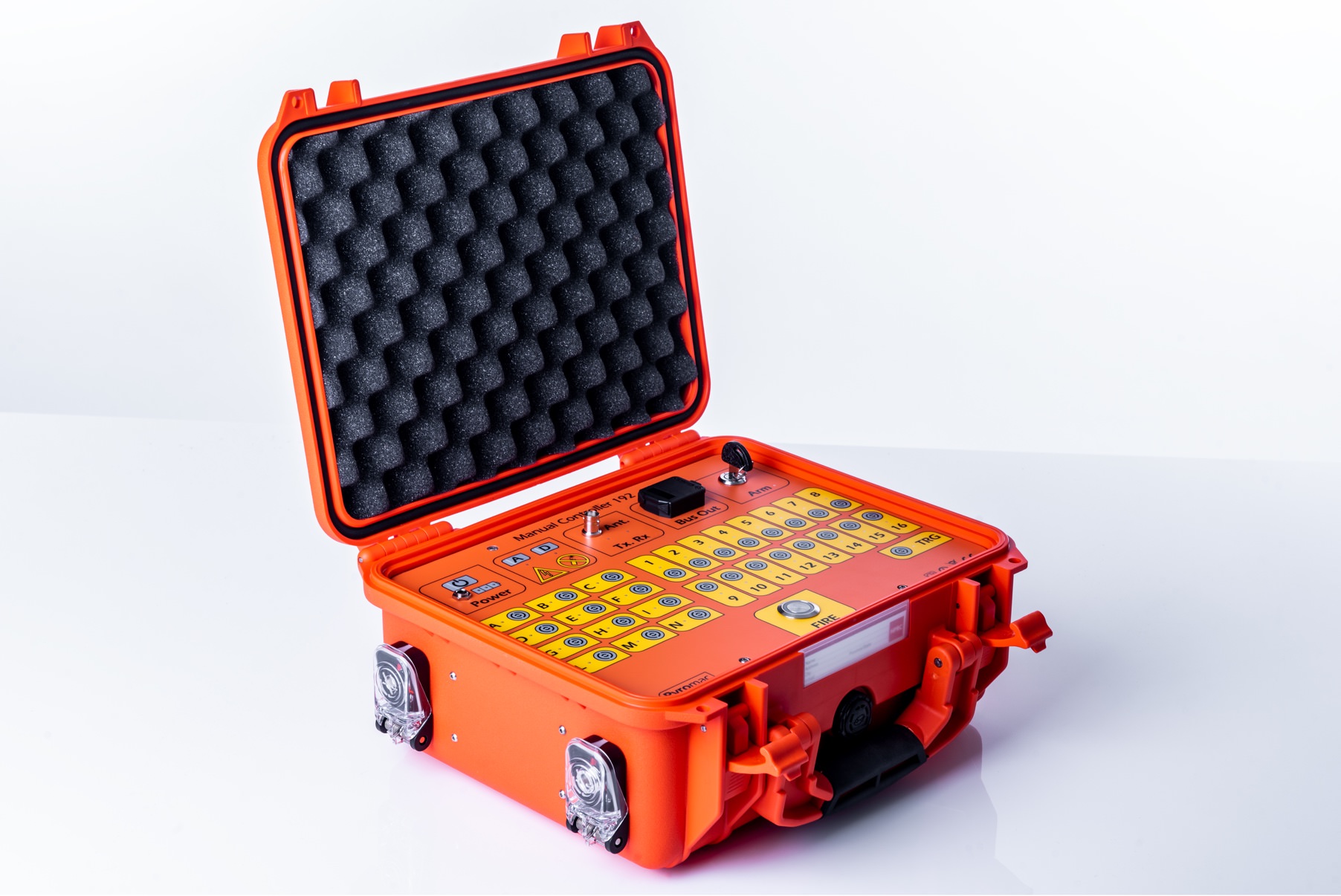 The Master Manual 192 is a professional firing system for igniting manual shows entirely controlled by one single main unit.
The connection between the Master and slave modules can be by cable or by radio. The maximum amount of firing cues is 192, distributed among 12 slaves with 16 channels each.
Its completeness, simplicity, absences of programming, reliability, power and modularity make the Master Manual 192 the BEST IGNITION SYSTEM FOR MANUAL DISPLAYS.

The system consists of a main control unit (Manual 192) that manages the connected slats. In fact, there are 12 buttons to select the slave that will fire and 16 buttons for the actual firing of the cue.
In order to start an ignition simply press the button of the slave you want to use (from A to N) and then the button to select the cue (from 1 to 16). It is also possible to fire multiple slaves at the same time (for example, for firing from multiple positions): all you need to do is select more than one slave and when you will press the FIRE button, all selected devices will fire at the same time.
On the control panel, there is also a safety key for activating firing commands. All test features can be done without the safety key, whereas for the actual pyrotechnic ignition the safety key must be turned on ARM.
The igniters’ condition of each slave is shown on the Manual 192’s panel with 16 LED lights next to every firing button based on which slat is selected. This feature is very useful not only to verify the proper connection of firing cues, but also to keep track of the show (as the cues are fired, the test lights turn off).
The system comes with a battery charge test, which is shown by three specific LED lights. The powerful internal batteries allow to put on many shows without having to charge them each time.

The Slim16 are connected to the Master through XLR4 cables. The main difference between the Master Manual 192 and other firing system is in fact how easily the modules are connected: simply run one cable from the system and through all Slim16. Therefore it is no longer necessary to have a cable for every slat and individually connecting it to the controller. Forget the long and heavy multipolar cable reels!
It’s also possible to connect the Slave through radio link. In fact, one of the possible extras is the installing a long distance communication modem directly inside the controller’s case. If the user buys one or more Pyromac7 (that will be placed in the firing area), they can be used as “radio receivers” to which the Slim16 will be connected to with short wires. In case of firing form different positions it is recommended to use more than one Pyromac7 so that all positions are independent and wireless.
Every Slave has an internal address that identifies it: the order in which the modules are connected doesn’t matter, each one will only respond to its own address (A-N). A “Group code” was also added to this new system: it is a sort of password that each firing system has inside. This guarantees safety even in case of competitions where also other contestants are using the same firing system. The group code is NOT something the operator needs to worry about: all systems are sold already coded, functioning and ready to use. During firing, no kind of setting is necessary