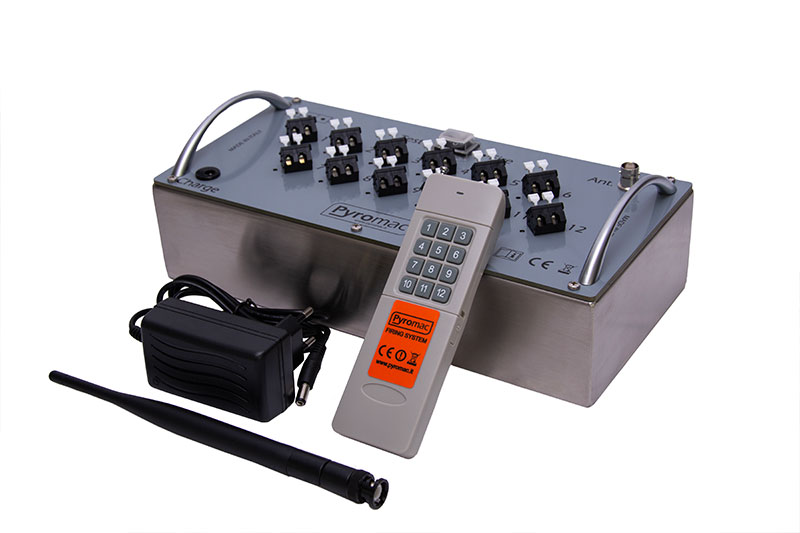 This unit is the most simple, compact and economical production Pyromac. Initially created for a small audience of “fans” of pyrotechnics, has extended more and more the number of sales among Pyrotechnic professionals. This note to the simple functions it provides.
The 12 lines firing activated by remote control, allow you to connect more igniters at the same time (the number of igniters depends on their technical characteristics, the distance at which they are placed and the type of cable used, it comes to approximately twenty igniters in series per channel).

The electronic internal management is developed with the latest technologies on the market. The activation of the lines takes place through specific electronic components at solid state: avoiding the mechanical contact (relay) avoids several encounter any difficulties of wear over time and malfunctions due to violent shock or vibration. It sometimes happens that due to incorrect connection of the igniters, or because of the fallout of smoldering material, can be generated short circuit the wires. The technology used in the Pyromac system, limits in automatic mode the output current, avoiding any unnecessary any kind of damage to the system or to the cables. Surely the igniter with the short circuit can not be fired, but all the rest of the show will continue without drawbacks.
The 3 led in the lower right corner have the function of monitoring the battery’s voltage, signaling when you are running low. The autonomy of the unit in “armed and ready to shoot” can be up to several days. The pyrotechnic can therefore rest assured even if it has to arm the unit for several hours before the show or if he has no chance to recharge before another use.